Happy 2015, Resistance Members!
Sincerely hoping all of you out there enjoyed a festive and joyous holiday season.   We can hardly believe another year has already gone by!

As of yet, we don’t have a release for Episode Two, but we will – soon.
Though it may appear that we’ve been a bit quiet, it’s actually been a crazy year for us, taking the series from raw footage, to rough cuts, to final cuts.  Watching the project take shape, it’s both elating and frustrating, as we are so eager to keep sharing it with all of you!  We are working continuously on finishing episodes and readying them for release.   Again, we take the chance to thank our fabulous crew for all their continuous hard work, including new additions to our post production team: particularly our sound editors, James Abbott and Chris Baine.  We’re so glad to have you on board!

In 2014, we also made it out to Awesome Con, the Maryland Renaissance Festival and Baltimore Comic Con, representing Genre Wars, but also partaking in our own personal favorite fandoms (check out the Genre Wars Instagram to see some of those highlights).

Additionally, as a bit of exciting news, our own Robin C. Farrell has scribbling away on the novelization of the first season!  This novel will cover the material seen in the series, but will also include additional scenes, as well as sequences accounted from alternate points of view.  Currently, the release of the novel is planned in tandem with the conclusion of the webisodes.  That time frame is subject to change, however—it could potentially be released earlier!—so we’ll keep you posted.

You can also look forward to more episodes as well as an extended trailer, with lots of bonus material.
It’s all coming, and very soon. So keep a weather eye on the horizon.

The days are flying off the calendar and the first day of shooting draws ever near. There will be LOTS of big announcements coming soon.  All of the big, important pieces are falling into place, and have done so within the last several days.

We can’t wait to share all the great news, so stay tuned! 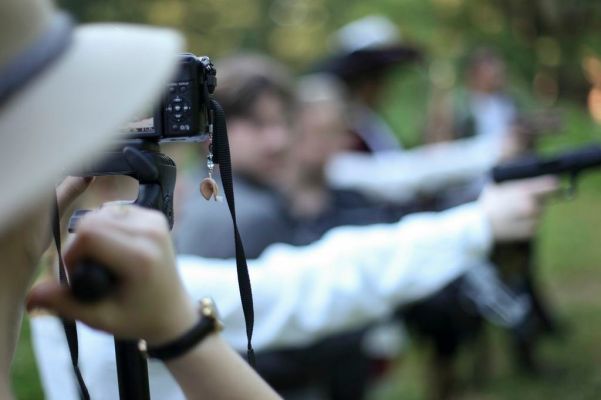 Greetings, everyone! Robin here. I want to start off by saying that it is my delight and privilege to be a part of this project. From the start it’s been this intangible, but fascinating concept that we’ve been attempting to really grasp and bring into reality. The process has been amazing for me, personally; the collaboration with Justin and everyone else has been tremendous fun. The amazing part now is seeing it really start to pick up some traction. I can see heads turning as the project gains speed and a whole new level of excitement begins as what we’ve been holding onto for so long, we are now really able to start sharing with others.

The last few weeks have been an absolute whirlwind of activity for us. We put a small featurette together (Genre Wars: Resistance Rising FIRST LOOK), we’ve officially cast over half the characters, the sets are beginning to take shape and the scripts, as Justin has mentioned previously, have nearly reached completion.

But the real highlight was last Saturday.
Picture this:
A calm, quiet morning.
The sun drapes across the green, empty field in soft, golden sheets.
There’s a crunch of tires over gravel as the first car pulls into the driveway.
A Pirate emerges along with a 1920’s Mobster and a Mech warrior.

Even long after the Genre Wars concept had been introduced and developed, the possibilities seemed endless; how many different culture-clashes we could create and the fun we could have with the mismatches. All great in theory of course, but on June 1st, we really got the chance to see how it would look in reality when we gathered a significant group of willing participants, all in full costume and lined them up next to each other.

As we had hoped and predicted, what we got was magical and transformative. There is no feeling greater than the moment when something you’ve been brainstorming about, developing in your head and obsessing over suddenly takes real shape. No matter how many projects I do, that transition from elusive concept to reality never gets old. And I don’t think it ever will. 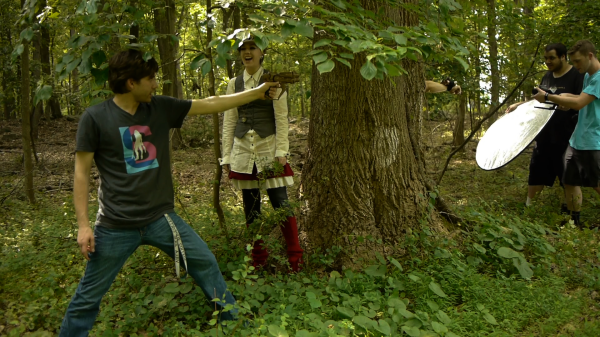 It was an all-day affair, but, as the saying goes, time certainly flew by as we were having our fun. Everyone who came out to participate was enthusiastic and committed to being there. The resulting photos and footage are excellent. Our two photographers, KC White (www.danesoar.wix.com/kcvanvliet) and Jenna Miller (of Jenna M. Miller Photography: http://www.facebook.com/jennamillerphoto?directed_target_id=0) really stepped up to the plate and produced some amazing work. The photos really shine, and especially because of the make-up artistry of Jessica Mongeon and Felicia Douglas. 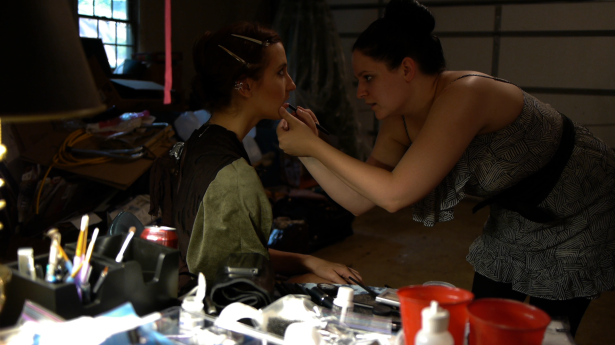 This photo/video shoot helped put into perspective what it is we’re trying to do. Several times during the day, people said to me, “I didn’t realize this was going to be such a big deal,” and, “when is the next shoot going to be?” and, “can I read the scripts?” This was all rewarding for me, personally, because it meant that what we’ve been working towards is becoming clear to others and the excitement, the interest that Justin and I have had in this story and these characters and this world is starting to rub off onto others. They can see what we see now. And it’s awesome.

There will be more shoots, both conceptual ones like this, and of the full cast once the roles have all been officially filled. There will be more interviews; second looks, third looks and a teaser trailer. And a poster. And a full-scale map of Kabathan. And, eventually, t-shirts!

What are we doing? We’re bringing something tangible into the world and we’re at the point now where we can finally start really sharing it with others.

It just doesn’t get better than that.

Until next time,
~ Robin

We have reached the point of the writing process where we could make tweaks and revisions forever. At some point you need to say “This is good enough.” That doesn’t mean that the script is bad and you have to settle for less-than-ideal, but it means that you have reached a milestone with the writing process and it’s time to take the project to the next stage. the thing to remember is that the script will always be changing. It can be written a certain way, but once you move into production itself, there are many things that will affect the filming process and adjustments will need to be made based on location and time. Furthermore, when the script finds its way into the hands of the actors, they might find that certain pieces of dialogue just don’t sound the same way when spoken as they did when written. Therefore, more adjustments will need to be made. The point is, you need to write the best script you can, then let it run it’s course in the rest of the project steps.

The script for Genre Wars season 1, Resistance Rising, is very in depth with plot and character development. I give a shout out to Robin Farrell for the excellent writing!
Now with with the full first season written in screenplay form, we are moving forward with the casting process and acquiring crew members. Our plan is to officially start production mid-summer of this year.