What’s this? The Mobsters were chasing a group of three individuals.  There were two fighters dressed in blue, with a bearded man with a staff in between them.

As we moved closer and more members of Legren’s camp entered the frey, the battle
scattered into many small sections. This was a full on long range skirmish.
So, how did the Fantasarians stand up to the long range guns of the Mobsters?
They have their ways.

The Mechs continued to assist as everyone tried to push back the oncoming Mobsters.  It seemed like they just didn’t stop coming. But that didn’t stop the Mechs.  They are used to fire fights like this one. They had their technology primed and ready to go.  Some weapons even came out of nowhere.

Amidst all the mini skirmishes going on, there was another figure who stepped in to assist, a shadow, unseen by all.  Only one person caught a quick glimpse of this shadow. Then it was gone.

Arrow, spear, bullet, knife, magical burst, energy blast; they all were seen and heard across this ever-changing battle ground.  The bearded man fought back with surprising ease, pushing back many foes at one time.

Finally the fight was over.

We witnessed a conversation between Legren and this bearded man, who called himself Cyntrenn.  Everyone else was present, eager to know why he had traveled all this way.

Today was a huge day for our Mobster fight! We had three camera units running all at once.  DL returned to help run his camera (2nd Unit), JD returned to both play Brock and run 3rd Unit Camera, and we had a new crew member come to run a fourth camera, Lee Tamer.  Lee was one of Justin’s classmates from various film classes at Stevenson University. It was great to have him come on board to help!

One of today’s BIGGEST highlights, however, was having, among our cast, Phil Amico,
one of the Kings from Medieval Times in Hanover, MD. Phil came to play the featured role of Cyntrenn The Wizard!!  Needless to say, this was rather epic.  He was only there a short time, but having him a part of this production added a great element to both the specific scene and the episodes as a whole.

Today was also Kelsey Reichard’s last day on set, as she, too, would soon be college-bound.  So, yet another member of the Genre Wars team had to leave, but not forever.  We thank Kelsey for all the time she put into playing her role of Tali. 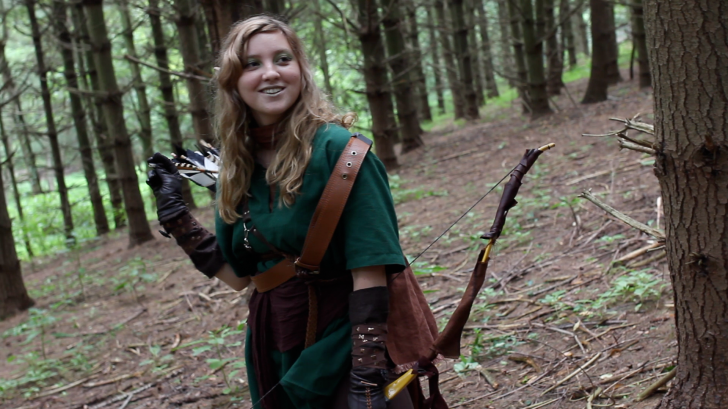 Having DL, JD, and Lee all on camera at the same time made this day a very productive day of shooting.  It definitely helped cover all the material we needed. JD still got to switch roles and be in front of the camera too.

Tony Moe, father of the director, ran around with “A Helmet Full of Water,” making sure that everyone was staying hydrated on the hot and humid August day.

Renee Bertaux was also there to help out, briefly stepping in as script supervisor.

We got a lot done today, thanks to everyone on set who were helping with all the jobs on set.  We were one step closer to finishing another fight sequence, and had an all around good time!

Thank you to all who contributed!!